EDIT (11 Feb): it seems that the writer of the ‘we’re eating poison’ piece has decided to remove that page from their site. Which I guess is an improvement over the original. However, the good people over at Metabunk provided some useful links to the past, and this site appears to be the source used for the ‘poison’ post.

No sooner have I written a post about the synergy between FB and blogging then it happens again 🙂 Again, hat-tip to Yvette d’Entremont, who posted a link to an article purporting to tell consumers how to distinguish between GM & ‘regular’ tomatoes. The writer of that article certainly wears their heart on their sleeve – just look at the title: “We’re Eating A Poison!” And they are wrong, wrong, wrong. Even the image at the top of their article is misleading.

I did leave a polite comment requesting evidence to support their claims. It appears that the owner of the page didn’t like it. I am shocked! Shocked, I say!

Anyway. The main reason that they are wrong is that …

… currently there aren’t any genetically-engineered tomatoes on the market.

There used to be one, the “Flavr Savr”, which came out with much fanfare in 1994. It had been modified to enhance its shelf life, but apparently was not a commercial success and was withdrawn in 1997. To date, nothing has replaced it, although there’s apparently quite a bit of research still going on into e.g. delayed ripening and resistance to pests and environmental stressors.

At this point it’s probably worth noting that the tomatoes we grow (or buy) & eat are themselves the result of centuries of modification by conventional selective breeding – and also techniques such as mutagenesis, which are not exactly ‘natural’. Nor are they subject to the same controls and rigorous testing required of any GM organism or product, despite the fact that mutagenesis creates much larger genetic changes than today’s very precise techniques for genetic engineering (think CRISPR). And yet conventional breeding methods can also cause problems: they led to the withdrawal of some potato varieties in the US & Sweden, because the spuds thus produced contained dangerously high levels of the poisonous compound alpha-solanine.

Then there’s that image. 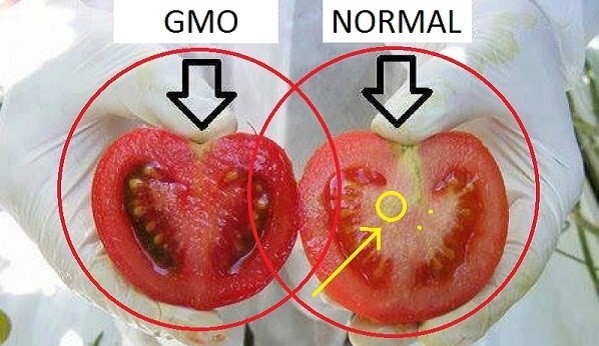 They’d obviously like us to think that one – perhaps the lushly rich red one to the left? – is natural/organic, and the other, a GMOA. Especially when they ask, “can you tell the difference between a regular tomato and a genetically modified one?” But, as we know, all commercially-available tomatoes are produced by conventional means. Still, I guess they feel that an image speaks a thousand words. (I woudn’t want that rich red one in my sandwich though – it looks like a quick route to sogginess.)

And then there’s the supposed “mounting evidence that links [GE foods] to toxic & allergic reactions, sick, sterile and dead livestock, and damage to virtually every organ studied in lab animals”. Now, at the very least, I’d expect to see links or citations supporting a sweeping statement like that, but the article offers none. (I asked for them, when I made my sin-binned comment.) Anway, on the livestock front, there are now 22 years’ worth of data available on stock fed mostly on GMO foods. Back in 2014 Steven NovellaB wrote about a very extensive review study that looked at the first 19 years of information. The animals covered by the various studies reviewed in the paper Novella discussed number in the billions (that is not a typo). It did not identify any problems of the sort listed in the OP that I’m discussing here. (The split between industry-funded & independent research projects into GMOs is roughly 50:50.)

On allergies – apparently the great majority of food-related allergic reactions in the US are caused by antigens from 8 foods: peanuts, tree nuts, milk, eggs, wheat, soy, shellfish, and fish. only GM soybeans are commercially available. There are a number of fairly stringent tests required of those applying to market foods with a GE component, & in New Zealand the results of these tests have to be reviewed by Food Safety Australia NZ. The goal of these safety assessments?

So far no food derived from GMOs has been found to cause new allergies.

TL;DR: a scary headline & some scary ‘factoids’, unsupported by data of any sort. Colour me unimpressed.

A And in fact, a reverse image seach on google brings up a large number of iterations of this image, including several pages that make it clear that the paler tom of the two is supposedly teh ebil GMO version. They clearly avoid letting the facts get in the way of a good story.

B Novella has a couple of more recent posts on this subject here and here. The second link makes for fascinating reading.

3 thoughts on “no, we have no GM tomatoes”