Midas cichlids (Amphilophus spp.) are a popular aquarium fish, but in the wild they’re found in South America, ranging from Nicaragua to Costa Rica. The 2018 Schol Bio paper included a really interesting question about a Nicaraguan ‘species complex‘ of these fish, based on a paper in Nature Communications. and a monograph in Cuadernos de Investigacion de la UCA. After reading the usual extensive resource material (maps, images, graphs & written information), students were asked to analyse the information provided in the resource material and integrate it with [their] biological knowledge to discuss the evolutionary processes and patterns that have resulted in the diversity of the Midas cichlid species complex in Lakes Xiloá and Apoyo.

The first thing to note here is that both these lakes are very young in geological terms. They are both crater lakes; Apoyo is quite deep (200m) and no more than 23,000 years old, while Xiloá is less than 6,100 years old and up to 88.5m deep in some spots.There are 6 Midas cichlid species in Apoyo and 4 in Xiloá. We’re told these fish population are probably the result of single colonisation events (Elmer, Fan, Kusche et al., 2014): the Xiloán fish arrived from Lake Managua about 5,400 years ago, while the Apoyan colonisers came from Lake Nicaragua around 10,000 years ago. 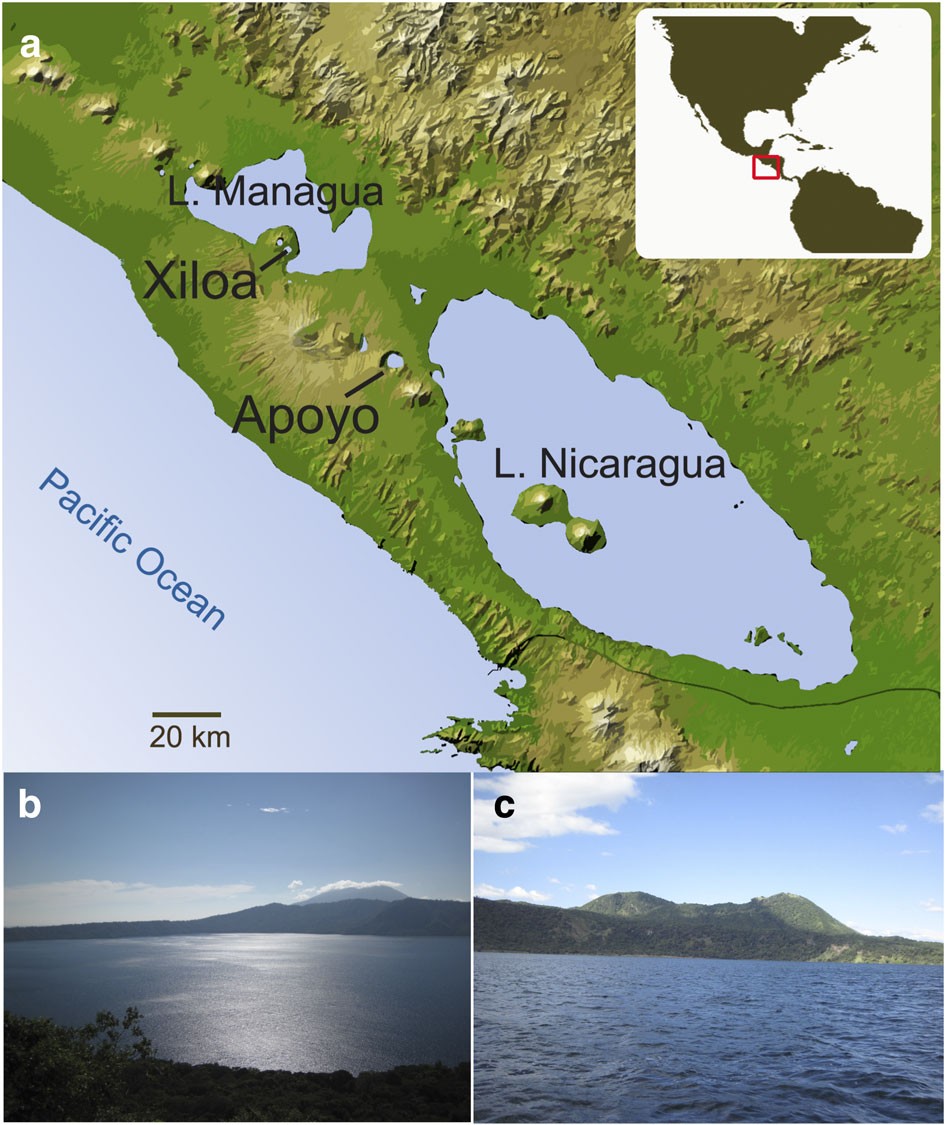 Figure 1: study area. (a) Topographic map of Nicaragua showing the location of the two crater lakes … , Xiloá and Apoyo. (b) Photograph of Apoyo and (c) Xiloá, showing the crater walls and lake landscape … . From Elmer, Fan, Kusche et al., 2014.

This means that the Founder effect is probably operating in each of the two crater lakes – the small founder populations would have different gene pools, as a result of coming from different sources, and being subject to genetic drift. In addition, there would be different selection pressures in play in Apoyo & Xiloá, pressures that probably also differed from those in the source lakes. For example, the source lakes are both very shallow, so the crater lakes offer a novel open-water habitat in addition to shallow shorelines. It’s also quite possible that there were no other competing or predatory species present in the new lakes.

The result has been adaptive radiation in each lake, producing multiple species of cichlids over a short span of time (geologically-speaking) – an example of punctuated equilibrium. Students, remember that simply saying this wouldn’t be enough – you need to explain how this might work. For example, as the original founding populations got larger, there’d be increasing competition for resources. Individuals with features that gave them an advantage (e.g. the ability to forage in the new open water habitat) could do better at obtaining those resources, and if the features had a genetic component – either existing, or due to a novel mutation – there’d be chance of this being passed on to their offspring. (It’s possible that Apoyo has more cichlid species because it’s an older lake.)

In both cases we’re looking at examples of sympatric speciation that’s resulted in morphological and ecological differentiation: elongated vs high-bodied shape, and use of different ecological niches. (As the authors of both papers I’ve referred to note, there are also genetic differences between the fish species in the lakes, as you’d expect given their origins in Founder events.) What does this mean in practice? Well, we know it’s sympatric speciation, because within each crater lake¹ there are no geographic barriers that might prevent gene flow between different groups of fish. However, we can make an educated guess at what other barriers might be in play. Thus, in the case of Xiloá, breeding pairs of three of the species are found predominantly at different depths and in different habitats (McKaye, Stauffer, van den Bergh et al., 2002). For example, A. xiloaensis is found mostly in rocky habitat at depths between 7.5 & 13.5m, while A.amarillo prefers waterweeds and shallower water. Sexual selection might also be involved, given that body shape and colour/colour patterns differ between species. (There are some excellent examples in the 2002 paper.)

That is, there are reproductive isolating mechanisms (RIMs) operating between species in each of the lakes. We’re told in the resource material that interspecific pairs occasionally form, but don’t breed successfully, so these RIMs are probably prezygotic, acting before fertilisation happens.

The existence of the different body shapes in each crater lake is an example of disruptive selection. The limnetic form is more streamlined, & was likely selected for in the new open-water niche in both lakes, where it would provide a speed advantage. (It’s not found in either of the shallow source lakes.) Data from Lake Xiloá show that species with the ‘benthic’ body form eat a lot of water snails, while the ‘limnetic’ species A.sagittae consumes mostly other fish. However, the higher-bodied benthic form – found in both source lakes as well as in Apoyo and Xiloá – continued to be selected for in the shallow shoreline habitats of the lakes. The limnetic species of Apoyo are more closely related to the lake’s benthic species than they are to limnetic species in Xiloá.

So, because we’ve got the evolution of a streamlined limnetic body form in both of the deep crater lakes, we can say we’re looking at convergent (or parallel) evolution from the original benthic form found in the shallow-water lakes Managua & Nicaragua.

As I said, it was a really interesting question 😊

¹ Comparing lakes, of course, we’d be talking about allopatric speciation, as there are geographical barriers to movement in place.