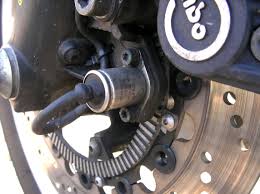 Yesterday afternoon I had to call on my car’s anti-lock braking system (ABS). For reasons best known to its driver, a car pulled out of a side road right in front of me while I was driving home after work, and I needed to stop in a hurry. I rather think the car behind me had to rely on its ABS too, to avoid hitting me.

I don’t think I’ve ever had to brake that hard in this particular car before. The crunching noise the ABS makes and the vibration in the brake pedal certainly took me by surprise, even though I knew that’s what it does.

The ABS allows the brakes to operate to maximum effect by controlling the braking so that the wheels are just at the point of slipping, but not beyond. The video shows the control in action.

Braking ultimately depends on how good your tyre’s grip with the road is. Rubber against dry asphalt has a high coefficient of static friction (a measure of stickiness between surfaces) – EngineeringToolbox gives it as about 0.9 – which means that when a car is moving forward the tyres are rolling, not sliding, along the road. The bit of the tyre in contact with the ground is always stationary with respect to the ground. It also means that, by applying the handbrake and locking the wheels, the car can park happily on some very steep gradients, provided it’s not icy. The frictional force between the road and the tyres is sufficient to prevent the car from sliding backwards down the hill.

However, there is a limit to that frictional force, and this is why wheels can lock and cars slide, especially on a wet, icy or loose-surface road. If the braking on a moving car is too severe, the frictional force between the road and the tyre is insufficient to keep the tyre sticking to the road, and thus ‘rolling’. Instead, the tyre slides. This is bad for several reasons. First it means that you have lost control of the car, and it doesn’t do your tyres any good. But also, since the coefficient of kinetic (or ‘sliding’) friction is generally less than the coefficient of static friction (EngineeringToolbox gives about 0.5-0.8 for rubber against dry asphalt), it means that the total braking force is lower. You will take longer to stop with sliding tyres than with rolling tyres.

The ABS senses when the wheels have locked, and then pumps brake fluid in bursts. It allows the braking to take full effect, but then releases the brakes momentarily when they ‘lock’, before applying the braking again. It’s like what you need to do on a non-ABS car (probably there aren’t too many of these on the roads any more) – pump the brake pedal yourself. That rapid bursting is what makes the characteristic ABS crunching noise.

ABS just controls the ‘straight line’ action of the tyres on the road, but that was sufficient for my purposes yesterday. There’s also the potential for tyres to slip sideways if cornering too fast. ABS won’t help with that – but that’s where Electronic Stability Control comes in. Now, this technology is really clever, using the Coriolis effect manifested in the vibrational modes of micromechanical tuning forks to measuring yaw rates – something that first had application in the aviation industry.