Sponges are strange organisms – classified as animals, they definitely look the odd one out. I rather like them: no real tissue development, no organs, immobile, & a growth habit that looks distinctly plant-like. Instead, what you get is an organism formed from just a few types of loosely-organised cells, all sitting (& moving) on & within a ‘skeleton’ made either of a protein (aptly enough, called ‘spongin’) or of spicules, which are something like fibreglass. You would not want to use a spicule-sponge in the bath, unless you were intending some serious exfoliating.

The simplest sponge body is rather like a hollow tube with perforated walls: the perforations, or pores, are what gives the phylum its Latin name, Porifera (literally, ‘pore-bearer’). Each pore is lined with a type of cell known as a porocyte (where ‘-cyte’ means ‘cell’) & leads in to the sponge’s inner cavity (the ‘spongocoel’. Choanocytes (‘collar’ cells) line the cavity & their beating flagella draw water in through the pores; they also trap small food particles drawn into the sponge on the water currents. Amoebocytes are able to move through the sponge’s body & transfer digested food from the choanocytes to porocytes & the epidermal cells that cover the outside of the sponge. So, sponges are filter feeders. Well, most of them are. But some deep-sea sponges turn out to be carnivores. One of them lives in NZ waters and this year was chosen as one of the international Top 10 New Species of 2010. Chondrocladia (Meliiderma) turbiformis is just 2cm long & lives at depths of around 1000 metres on the Chatham Rise, off the eastern NZ coast.

It’s hard to see how a small, sessile organism with no apparent means of catching prey can lead a carnivorous lifestyle. It turns out that the outer surface of C.turbiformis is covered by most unusual spicules. One type of spicule (‘D’ & ‘E’) on the image below is C-shaped, while another type is described by the scientists who discovered the sponge (NIWA scientist Michelle Kelly & French sponge expert Jean Vacelet) as reminiscent of spinning tops – they’re labelled ‘G’ on the image, which also shows the sponge itself (‘A’) (image by Jean Vacelet).

Apparently the C-shaped spicules are sticky (must be to do with their spiky ends) & trap small animals that brush against them. The amoebocytes then swing into action, moving towards the trapped animal & each engulfing a tiny portion of it to take back to the rest of the cells of the sponge’s body. It seems that this strange lifestyle is an ancient one – because the only other known sponges with ‘spinning top’ spicules come from early Jurassic fossils.

Catching your dinner with velcro sounds unusual enough, but there is another carnivorous sponge that lassos its prey! Asbestopluma hypogea extrudes tiny filaments, all covered with hook-like spicules, that snag small prey out of the water column. 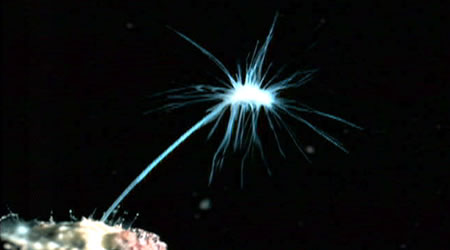 More filaments grow out to entangle and surround the prey & amoebocytes flock to the captured organism & engulf if, piece by tiny piece. Death by a thousand nibbles? A slow death, anyway – apparently it takes 8-10 days for a large prey organism to be consumed in this way.